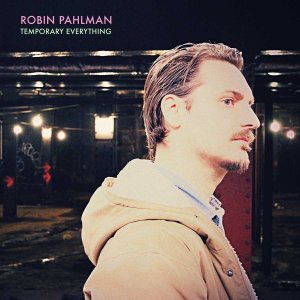 Take a little Bruce Springsteen’s ‘Dancing In The Dark’, mix it with The Handsome Family along with some Finnish blood and you get ‘Feedback & Static’, the first single from Robin Pahlman’s forthcoming album Temporary Everything.

“Bruce and Handsome Family? I’ll take it!”, Pahlman responds when he hears my first-listen reactions to the song.

– I wasn’t really happy with it at first but after a lot of layers and lots of 80’s synths it became my favourite song on the album. It was the last song we recorded and I actually made the last arrangements the night before and wrote the lyrics in the studio.

– I guess the song is about someone who lives backwards and views the present through another person.

It’s been a busy few years for the Finnish songwriter who relocated to New York in 2014. Before that he lived in Vienna, released his debut solo EP in 2013 and toured around Europe. Besides writing new material lately he’s been actively playing solo shows in and around New York and touring the states as a guitarist for Brooklyn band Howth.

Temporary Everything is Pahlman’s first full-lenght album, which he wrote and produced in New York. This time Pahlman wanted to explore some new territory outside of his usual folk inspired style.

– I wanted more electric guitars on this album. Initially I wanted it to be some sort of folk-rock affair but it didn’t turn out that way. I listened to so many different kinds of music while making the album. There’s a lot of dream pop and Creation Records/kraut rock influnces on there, Pahlman says.

– Nostalgia is a recurring theme on the album. I was allergic to that kind of stuff before and it’s always made me uncomfortable when people want to sit down and remember the old days. But during the writing process I realized that I had to own my nostalgic thoughts instead of pushing them away, in order to move forward instead of backwards.

Temporary Everything  is released March 11 on Monkey Records. .

Pre-order Temporary Everything here via bandcamp.