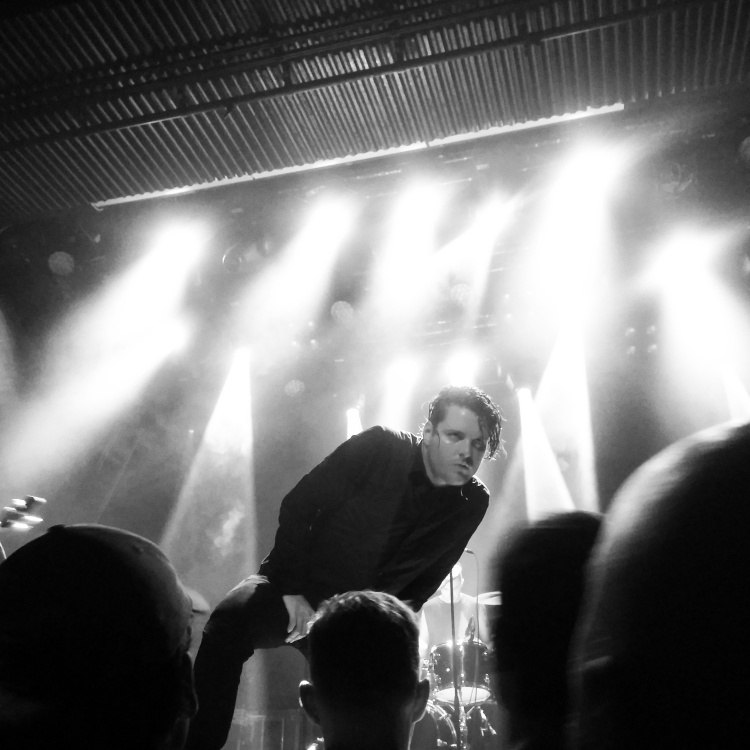 With soaked hair dripping down across his face, his black buttoned up shirt already drenched in sweat, George Clarke appears on stage with a feral look in his eyes. Like he’s sizing up the opposition and ready to attack. It’s late summer in Helsinki and an unexpected heat-wave has been hanging over the city the whole day. The air inside Tavastia is smoldering.

With the disciplined gracefulness of a conductor and a simmering undercurrent of fury, he raises his hand and ceremoniously signals with one sharp move of his hand that Deafheaven is now in command.

Instantaneously the band erupts and unleashes a thunderous blast of torpedo guitars that pierce your skull. The evening’s hour-long set is dedicated to showcasing their most recent album, New Bermuda, which they plow through without theatrics or any form of sensationalism. Watching Clarke is unsettling at times. He moves like an animal on stage; restless, alert, hyper-vigilant. He seems used to a much tougher crowd than the one that’s turned up this Monday evening at Tavastia in Helsinki. His presence is both invading and electrifying as he places a piercing stare on you. He reaches out his hands towards the audience, like he wants you to feel every word that he’s saying.

It’s been five years since Deafheaven last played Helsinki and in that time they’ve grown into one of the most genre defining and critically acclaimed metal bands of today. Their take on black metal has made the metal community stop and turn, some with hesitation but most in awe. All the initial hype that surrounded Deafheaven might have done them a disservice in the beginning, as if they were nothing but a gateway band in to harder metal. But it never prevented them from gaining momentum.

Since their 2011 debut Roads to Judah, the San Fransisco group has systematically silenced everyone who would shrug them off as not being metal enough, or slapped the “hipster metal” label on them. While a label which they have been instrumental in redefining, it’s one that will hopefully soon be ultimately eradicated from the discussions surrounding their music.

“You guys have some water? It’s pretty hot in here”, Clarke asks the audience in between songs. He seems genuinely curious as to how we haven’t all fallen to the floor in pure exhaustion. A valid concern.

I can’t help view it as a form of peace-offering, as he throws a water bottle into the audience. It lands in the hands of the guy who’s been pressed against the stage all along, who later on delivers the first punch which sets off the evening’s only mosh pit. Appropriately erupting within the first explosive seconds of “Sunbather”, during the encore.

Everyone around me seem to be in the same cathartic state of mind while Deafheaven cradle us to the comforting sounds of Dreamhouse. “I want to dream”, Clarke screams. It’s a call to action. Deafheaven is at home in that borderland between heaven and hell, light and dark, conscious and unconscious, dream and reality. Perhaps that’s why they draw you in so completely, as if you’re balancing on the edge alongside them, with your eyes closed.