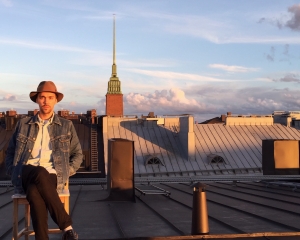 Helsinki-based bedroom pop maker Rami Vierula, who is more commonly known as the frontman for dream pop ensemble Delay Trees, has been busy working on his solo project 23:23 since 2009. After releasing his Trilogy album compilation in 2015, he’s now returned with a new EP entitled To Die On A Faraway Island (Soliti).

Vierula has described 23:23 as a project ‘born out of necessity’ and as a sudden realization that ‘all of my emotional and rational world started to take its form in music’. On ‘Faraway Island’ these statements are laid bare with candour through romantized escapism and dreams of dying on a faraway Island with the one you love.

The video, directed by Onni Nieminen, echoes these sentiments and places Vierula in a wintery and stale environment, carressed by shadows that appear as if drawn to him out of sympathy.

Watch the video below.