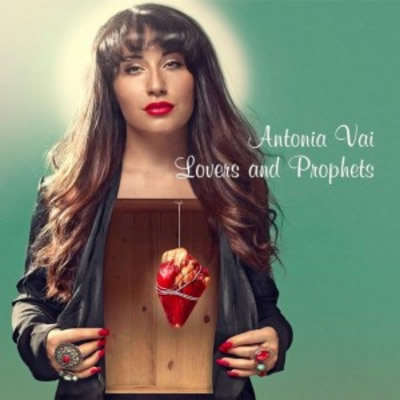 There seems to be limited social space in music for female singer-songwriters. The tendency is to place every girl with or without a guitar in her lap in the same category.

Sweden’s Antonia Vai should be able to escape limiting categorization. This 24- year old singer/songwriter and multi-instrumentalist, who released her debut album Lovers and Prophets in September this year, has already made a name for herself in her hometown of Stockholm, being labelled “a bohemian soul diva”. This title sits well with Antonia Vai, whose rich voice will immediately demand your attention as much as her multicultural soul folk.
The album is an ambitious blend of soul, blues, folk and jazz all of which  Vai handles effortless. Her deep, soulful vocals immediately puts her in a category of her own. She is a versatile singer but on the album she directs her energy towards channelling the emotions of stories instead of  showcasing her vocal strengths. When listening to the album it’s easy to imagine her in a smoky jazz club or  picture her singing the blues in a whiskey bar in some 50’s film noir movie. Album opener “Don’t Let The Bedbugs Bite” brings out the folky side of Antonia Vai. The minimalist arrangement, a gentle acoustic guitar and Vai’s husky voice bring to mind a young Buffy Sainte – Marie. “Confessions Of Berlin”, also rid of a large production, is a bluesier affair with conga drums following Vai as she effortlessly creates the kind of intimate atmosphere, a skill that every good storyteller masters. Antonia Vail’s music is as multifaceted and complex as her voice. The mysterious overtones of Lovers and Prophets are especially palpable on the drowsy Portishead-esque “Russian Roulette” or the seductive and bluesy “Down The Rabbit Hole”.

“Moth To The Flame” breaks away from the acoustic guitar and voice formula, delivering a piano accompanying ballad of love gone sour. The assertive Antonia Vai’s avoids any kind of melancholy clichés, as she unceremoniously concludes that “Isn’t it a shame that we’ve grown apart”.  Her free-spirited nature, which echoes throughout album, is perhaps best expressed at the end of the song when she quietly repeats to herself: “Row out in the night/I grow, shout with the tide/I stand high like a lighthouse/Oh, the sea, a lovely place to”.