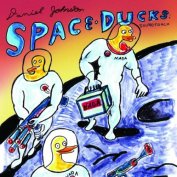 One of the most prolific and unique songwriters of our time, Daniel Johnston, has released a new album. The album serves as the soundtrack to his previously released comic book Space Ducks: An Infinite Comic Book of Musical Greatness, which came out last March. The now streamable soundtrack is entitled Space Ducks: Soundtrack and you can listen to it below.